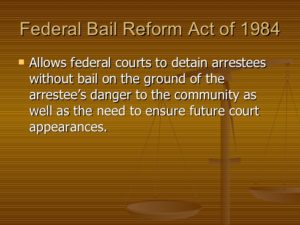 There’s much talk on a state and national level about the need for a reform for the United States bail bond system of monetary incentive to guarantee appearance. As it stands now, generally when someone stands accused of the crime they are given a fixed amount of cash to be posted to the court in order to insure their appearance at all court proceedings, otherwise known as a bail or bond.  This bond can take several forms including a deposit to the court of a percentage, (usually 10%) a signature bond, which is essentially a promise on the person’s word, or the full amount in the form of cash or a surety. The term surety in most cases ends up taking the form of a commercial bail bond. Where the real problem starts in the bail reform conversation is that no one seems to agree on what constitutes a reasonable bond and that the purpose of the bond is to ensure appearance.

The main argument being advanced by groups such as “equal justice for all” and “VERA” is that any monetary condition of bond violates the equal protection clause of the U.S. constitution. The theory holds that if someone can not afford bond by default they are being held unlawfully and their civil rights are being stepped on. The curious thing is exactly how these groups have sought to enact their agenda. Instead of asking for a state by state referendum on the subject to gauge the will of the people, these groups have instead sought to impose their radical ideas through the hope of judicial activism.  I suspect this decision was made at least in part due to the fact that “let’s install a revolving door at the county jail after someone victimizes you” is a hard sell to make to John Q Public.  It’s clear that once it would become common knowledge that low level crime carried what amounts to no deterrent that recidivism would skyrocket. The same could be said for crime rates in general. 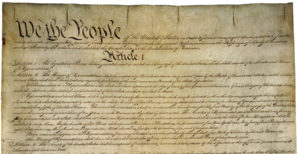 Even with the highly dubious manner in which these anti money bail groups are trying to impose their plan by clearly circumventing the will of the people in mind, another immediate concern comes to the forefront, namely; if you scrap a 200 year old proven system that is the cornerstone of the American pretrial justice system, what are you going to replace it with? The answer to this question is even more troubling than the approach being used to implement it.  Advocates of a pretrial services program have decided that the best way to safeguard American liberties and rights is to abdicate the responsibility to a machine. In essence they wish to use a predetermined algorithm (which they will not disclose to the public for…..reasons) to make the sole recommendation as to the risk level of each defendant in all criminal proceedings. Let that soak in for a second. If you stand accused of a crime, you’re given a questionnaire and based on the answers your  answer key is fed into a machine which then decides if your going to return to court and/or if you’re a danger to the community at large. I can’t even get the Kiosk at the gas station to correctly make my burrito but I’m expected to trust it with my life and liberty? 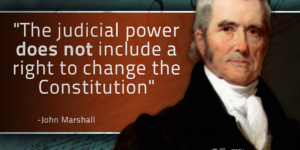 When in human history ever has it been a good idea to completely remove the human element from a decision involving anything, much less government? When has letting a machine due the thinking for us ever ended well? I don’t need to have seen the Terminator to know that it’s a very bad idea to pass on issues of life and death to a calculator. For hundreds of years judges have been making bail decisions based on facts, reason and a wealth of experience. Critics claim that judges are overwhelmed and can’t spend enough time on each case to make a fair bail decision at an arrangement but let me ask the question, how much time is the algorithm going to spend making a judgment? 30 seconds? 10 seconds? a fraction of a second? We sadly don’t even know the answer to that question because the people touting the system refuse to make their methods public. I know complete lack of transparency by my government always makes me feel warm and fuzzy inside. For all the American people know the system is a monkey in a box pulling levers at random. The sad thing is that no one has given up one iota of proof that such a claim is false. They simply say the current system is unfair and they have all the answers, they in no way feel inclined to tell you what their “solutions” actually entail.

The idea of society collectively paying for the misdeeds of a few of its members is a socialist one.  If you believe that our justice system should be more socialist in nature then you’re entitled to that opinion, and even though I may vehemently disagree (and I do) at least you’re giving your honest ideas on the subject. However, what we have in this situation is clever sleight of hand disguising such ideas in the sheep’s clothing of “equal justice for the poor”. The bail system doesn’t discriminate against the poor anymore then the notion of retained council vs. a public defender. Actually the inadequacy of competent counsel is a far bigger concern than pretrial detention. OJ Simpson, Casey Anthony (after bail was revoked),  Robert Blake (over a year in jail before he was able to post bail) all good examples of people that were able to successfully defend themselves from behind bars because they had the financial means to do so. Their attorneys were the difference in those cases, not pretrial detention. If indeed the stated aim is to promote equal justice under the law then why not then sue public defenders offices around the country for inadequacy of counsel at trial and unequal protection? Lord knows one doesn’t have to look far to find ripe examples. The simple answers is that the people pushing the progressive agenda forward are lawyers and most lawyers don’t like to attack other lawyers. Even more so when the ones doing the attacking are lining their pockets with grant money to have the fight. If the notion of for profit Legal representation was to come under attack I have my doubts that the ones fighting this fight would stay nearly as zealous. The hypocrisy would be laughable if the stakes were not so high for the American public.

At the end of the day the common citizen should be educated on this matter of grave importance and quickly. Their are people out there that even now seek to steal the 8th amendment of the constitution right out from under us as surely as the thieves they seek to set free from the burdens of facing the consequences of their actions.  I am of the steadfast belief that being judged by a computer instead of my peers is a gross violation of my 8th amendment right to reasonable bail. I find nothing reasonable about my liberties being put solely in the hands of an automaton, and worse yet, an automation that no one knows anything about or what its judging me based on. We have a right to be judged by our peers and I most certainly do not consider my IPhone a peer. It can’t even dial the correct number half the time  let alone tell if I’m going to skip court. With that in mind I would still bet the farm that whatever dubious “formula” VERA is using is still nowhere near as sophisticated as my IPhone. Until someone shows me exactly what goes into the magic formula ill stick with the human condition, hell I’ll even take the monkey before I bet on the machine and I’m guessing if you told the American people the straight truth, most of them would as well.